Getting José Andrés and Dominique Crenn to focus for an interview is, frankly, a little challenging. There’s a lot of crosstalk, numerous sidebars, outright digressions, questions on top of questions.

They’re two oversized personalities, each practically electrified with exuberance. She’s the first woman in America to earn three Michelin stars for Atelier Crenn in San Francisco and an “Iron Chef” star; he divides his time between feeding those in need through World Central Kitchen and overseeing an ever-expanding restaurant empire recently rebranded as the José Andrés Group. At this point, it’s not fair to simply call them celebrity chefs.

Crenn agrees with this assessment. “We are not chefs; we are humans that cook,” she says. “We love people; we love community. Food is a tool, a language and a connector for us to do other things.” The pair are sitting down at a booth in a corner of Barmini before overseeing the final service of a two-night collaboration dinner at Minibar organized by Capital One, part of the company’s dining program that gives its cardholders access to unique culinary experiences. In comparison to our conversation, organizing the meals was smooth and focused.
“No negotiations; it’s very organic,” Crenn said. “There’s so much respect, so we go with the flow.”

Andrés believes the meal seamlessly intertwines their styles. “When you eat, you won’t know which are her dishes and which are mine,” he says.

The dinner begins with a drink at Barmini, presented with the usual theatrical flourish. A bartender carries over a wooden crate full of apples. One has been hollowed out to create a vessel for steamy hot toddy powered by bourbon, lemon, ginger and minty Branca Menta. There are only a few minutes to enjoy it before — after much urging from attendant personnel — the chefs are whisked away, and guests are seated at Minibar for an expansive three-hour meal featuring two dozen courses, seven wine pairings and a golden-hued, umami-rich aged sake that steals the show.

The opening salvo of dishes comes rapid-fire, including a parmesan danish with shaved truffle hiding not-too-sweet lemon curd, tempura battered shiso leaf decorated with a garden of micro herbs and a miniature crab banh mi on apple meringue “bread.” Next up was caviar two ways: on a spoon with dainty petals of pickled onion and alongside a cold cloud of aerated cauliflower. 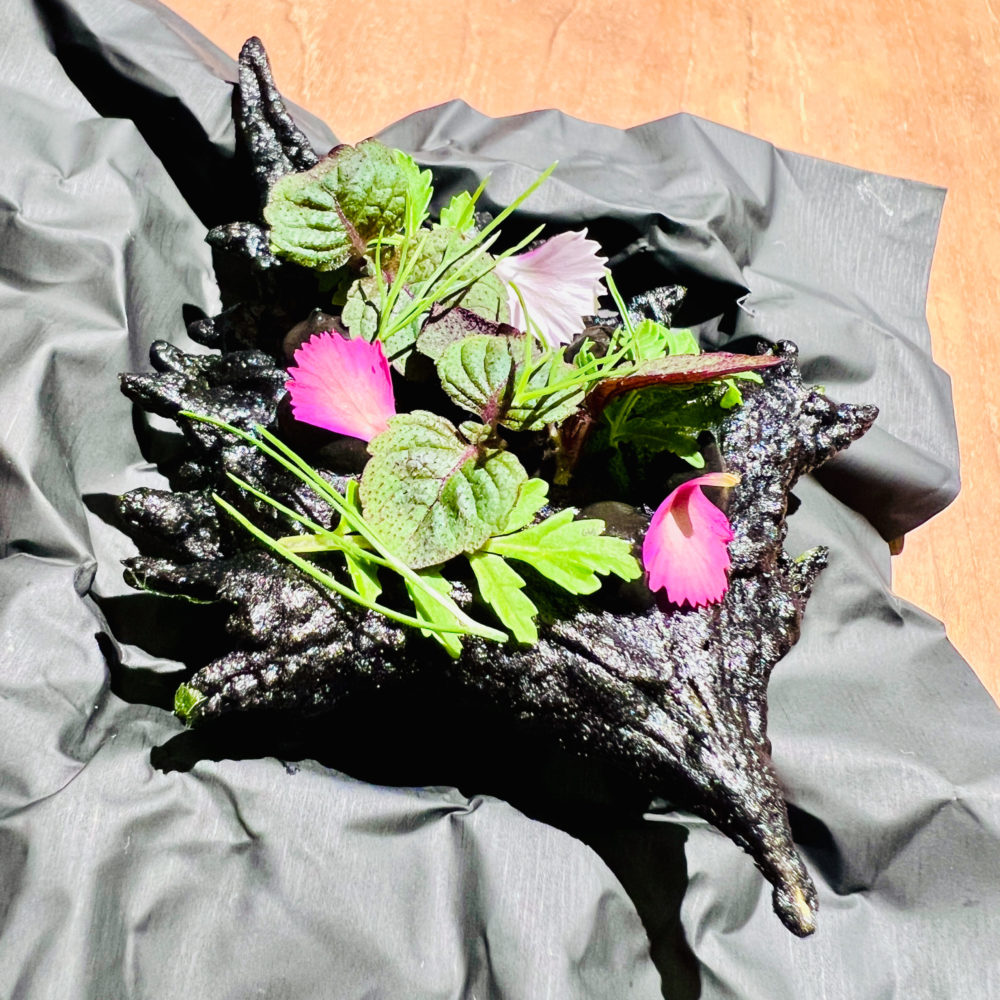 The middle of the meal is mostly seafood, including a make-your-own “taco” with scallion pancake and king crab, and reinvented New England clam chowder featuring airy potato mousse dotted with tiny bacon cubes. Desserts are myriad and utterly delightful. A highlight is three-bite tempura fried Krispy Kreme ice cream in the shape of a doughnut, which also hides hojicha (Japanese green tea) curd. Throughout it all, Crenn is rocking out and helping out, insisting the soundtrack of 80s hits be cranked louder and louder, while Andrés divides his time between talking with guests and huddling with the kitchen crew. Taken as a whole experience, the chefs’ culinary visions complement each well. It’s a focused meal without crosstalk, digressions or sidebars, though it does inspire questions on top of questions. Like the ones posed by a guest sitting next to me as they get up to leave, “Did that really happen? Am I dreaming?”