“Entering Alberta, we rode into what I can only describe as a Canadian hurricane,” Jake Godin recalls.

The 32-year-old, his father and a friend were crossing the 49th parallel on their way from D.C. to the Arctic Circle — a three-week, 10,000-mile journey — entirely on motorcycles.

“Rain was pouring, the wind was blowing sideways, lightning was flashing,” Godin says.
“We were white-knuckling for 60 miles through the storm.”

Long-distance motorcycling is a family affair for the Godins. Since their Arctic trip in 2014, Godin and his dad have completed five more adventures, including a trip up and down the East Coast and a roundtrip to the Grand Canyon. In 2017, he took a spin through Vietnam with his twin brother.

When not on the road, Godin covers national security issues for Newsy, focusing on the Middle East and Africa. A youthful raconteur with an eye for details, he knows a good story is worth the extra miles.

District Fray: How do you plan a long-distance motorcycle trip?

Jake Godin: Generally, we have a destination in mind and then craft the best ways to get there not on the interstate. When you’re riding, you’re not necessarily doing it for speed or just getting to a place. You’re doing it for the feeling of not being boxed in by a car, being able to see the scenery all around you. You can put your foot down and hit pavement. We’re always looking for routes that facilitate that feeling, with nice curved roads, valleys and big hills. It may take an extra 30 minutes to go the same distance as the interstate, but it’s way better.

How and what do you pack for a ride?
I always pack tools to fix common problems, like changing a tube inside the tire. Camping gear, though we stay in motels about half the time. A waterproof bag for my clothes, warm and cold weather outfits. I use panniers, soft side bags that can take the shape of whatever you’re putting in them, not like hard cases. I try to even them out with weight, which changes throughout the trip if I pick up a souvenir or find I can leave something I don’t need. I also try to organize the gear so the most necessary stuff is on top, like rain gear. We’ve stopped and zipped up lots of times on the road when we’ve seen rain clouds up ahead. All motorcyclists have to be amateur meteorologists (laughs). 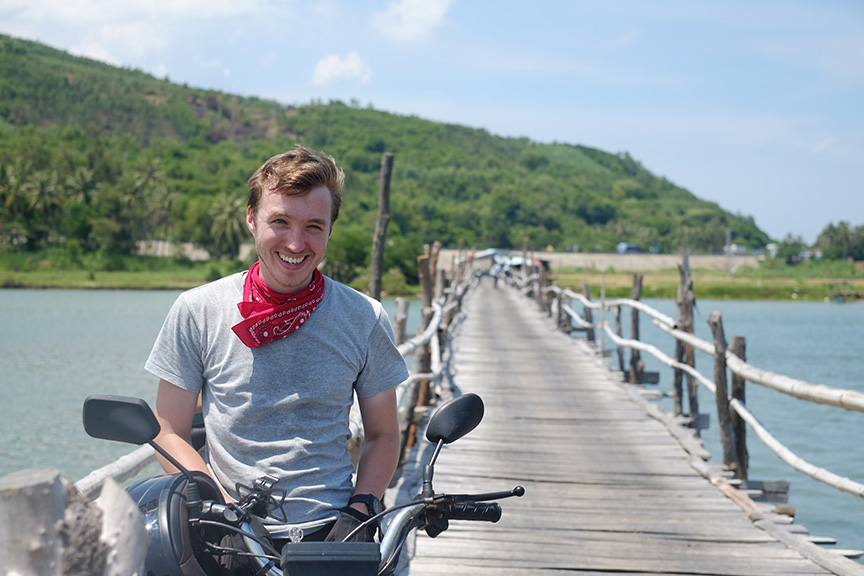 What’s a typical day on the road like?
We’ll start at 6 or 7 a.m. We typically don’t eat much breakfast. Some coffee. We repack and load up the bikes because we took everything off the night before. We gas up and then we’re on the road. If it’s an “easy” day, we take nice routes and stop if there’s a good view. If it’s a “we need to get there by the end of the day” kind of day, it’s more of a rush. We could go 300 miles or, if it’s on fun, twisty, slower roads, 150 miles. We grab lunch halfway through the day. A lot is dictated by how much you need to stop for gas. At the end of the day, which could be between 4 and 6 p.m. depending on how hard the ride was, we find somewhere to stay. You don’t want to ride at night. I try to have a local beer at the end of the day. And then we plan the next day around what the roads look like ahead of us.

What do riding and reporting share for you?
I do a lot of reporting on harsh, graphic things, like war. Riding is a very good way to destress and recharge from that. You get a lot of time in your own head. It really helps with processing things. [William Least Heat-Moon] wrote a book called “Blue Highways” about the smaller roads throughout the U.S. which were shown as blue lines on maps. I like seeing unexplored, off-the-beaten trail areas, so exploring those “blue highways” is the best way to the U.S. That’s also the best way to report. I look for things not in the spotlight, talk to people not in the spotlight. I did a lot of reporting on Syria. [Others focused on] ISIS, but I covered the smaller, off-the-beaten path stories about people living under ISIS or in rebel-held areas, people like you and me.

Interested in learning about riding? Godin recommends Ivy City’s DUNN LEWIS, his go-to motorcycle shop in D.C. “Riding takes planning, the right gear, and a little bit of knowledge about your bike. You can get those at DUNN LEWIS.”

Favorite song, book and movie about motorcycling?
“Highway Halo” by Old Crow Medicine Show, “Zen and the Art of Motorcycle Maintenance,” [by Robert M. Pirsig] and “The Motorcycle Diaries,” which is also a good book.

Item you won’t ride without?
A silver dollar from the 1880s, and a small metal bell my dad gave me. It’s something motorcyclists do [for good luck].

Next trip?
Québec City. My dad’s side of the family goes all the back to when they emigrated there from France.