The American craft beer industry is full of great small brewers all over the U.S. For someone outside of the beer world, it may seem impossible to stand out from the crowd when there are so many brewers vying for the attention of the consumer. But those entrenched in the world of craft beer know the most important part of being in the industry is supporting their fellow brewmasters and uplifting their community.

According to the Brewer’s Association, there were only 12 craft breweries located in D.C. proper as of 2019. But, when you take the surrounding states of Maryland and Virginia into account, there are hundreds of breweries perfecting their craft. Instead of being in competition with one another, these brewers often end up working together and have created a tight-knit community. According to Kofi Meroe, co-founder of Sankofa Beer Company, this closeness is further reinforced for the minority brewers in the area. “We’re a small community,” he says. “We all know each other for the most part.”

Meroe, who founded Sankofa with his cousin Amado Carsky roughly seven years ago, started his business like many other beer enthusiasts: by purchasing a home brew kit and hoping for something drinkable.

“I wasn’t making a bunch of money at the time, so I couldn’t support my need for craft beer,” Meroe recalls. “And then I had this crazy thought: If I started to make my own beer, then I wouldn’t have to pay for it. My dad sent me $100 to get new tires because I was so broke, and instead I bought a textbook and a home brewing kit.”

Fast-forward to the present, and Sankofa has formed a dedicated following of beer lovers in the DMV. Though they don’t have a brick-and-mortar establishment of their own yet, Sankofa has been able to promote their beer through pop-ups and collaborations with other brewers over the years.

Even in a pandemic, their collaborative Black is Beautiful lager with Saints Row Brewing Company in Rockville, Maryland sold out in just a few hours. Meroe explains that despite everything going on in the world, his small brewery is able to thrive thanks to the community he has worked to create. That, and the internet.

“As a small company, the internet is great,” Meroe explains. “I don’t need a large marketing budget, I just need someone who knows how to run social media to keep people engaged, and that’s going to bring people in. [And] because our sales are online now, people have way more access to our beer. There have definitely been more positives in the move to online. Frankly, we sold more beer than our normal beer releases.”

Sankofa’s success story is an inspiring one, but it means so much more to minorities who experience additional barriers when entering the beer world beyond those of their white counterparts.

Meroe knows this struggle, and regularly uses his platform as a way to uplift other would-be brewers.

“I understand how many people are watching us and what we do as a company,” he says. “In many cases, our success is going to inspire more people to come up from behind us. I try to make myself as available as possible to talk to folks who reach out for advice on how to start their own business. To me, there’s value in giving your time to those coming up so that you can help make sure that they don’t make the same mistakes that you did.” 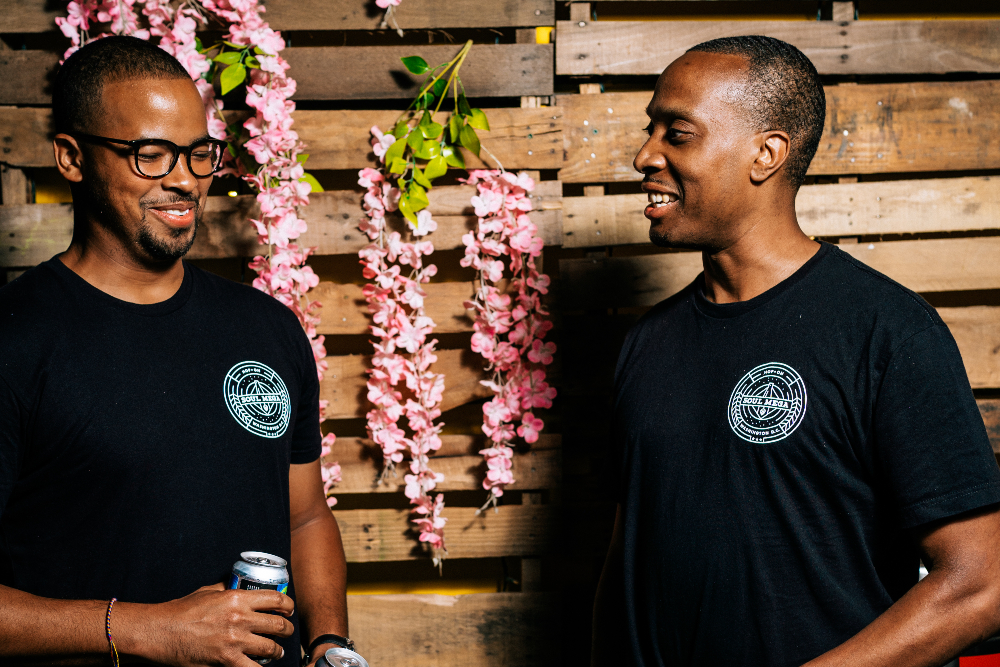 Another D.C. brewery has a similar attitude. Soul Mega Brewing, which celebrated one year of business on July 27, says in their mission statement that their name “serves as a reminder to the limitless potential of the human spirit.” Co-founder Elliott Johnson expands on this idea, stating that Soul Mega “is all about pursuing your passion, and what you do with that pursuit.”
Johnson and his co-founder Jahi Wartts want to inspire others to follow their dreams and are willing to lend a hand to those who dream of beer. Johnson also stresses the importance of creating an equal playing field in the world of beer so that more minorities may have the ability to enter it.

“The upfront capital it costs to start a brewery is not low,” Johnson says. “When it comes down to it, historically and systemically Black people don’t have the same access to capital as their white counterparts.”

Johnson and Wartts, like Meroe, do not have a brick-and-mortar establishment that would allow them to sell their brews and meet with customers. Before Covid-19, Soul Mega hosted pop-ups and attended events to bring their beer to the people. Meeting consumers was not only a smart business move, but a way to educate consumers about the beer industry.

“Before starting my business, I thought the bigger brands like Anheuser-Busch were basically the whole industry,” Johnson says. “Craft beer is thought of as a historically white thing; that’s just what we know. If more people were educated on beer, things would change. That’s kind of what our pop-up events are: an opportunity to educate people on beer. I think more education on the consumer level will encourage more people to get into the industry.”

As Meroe outlined earlier, one of the best ways to learn about beer is to speak with other brewers. Sankofa and Soul Mega are teaming up with Union Craft Brewing and Denizens Brewing Co. – other minority-owned breweries in the DMV – for a virtual discussion panel on diversity and inclusion in craft beer this month. Opportunities like this highlight how community-focused the craft beer scene is, and that there is space for everyone in the taproom.

“There’s so many conversations and techniques that are extremely cultural, and someone from that background has not been able to add their piece of culture to the craft beer culture,” Meroe concludes. “But there is so much room to grow.”

Learn more about Soul Mega Brewing at www.soulmega.com and follow them on Instagram @soulmegadc. Order their beer for delivery at www.biermi.com.